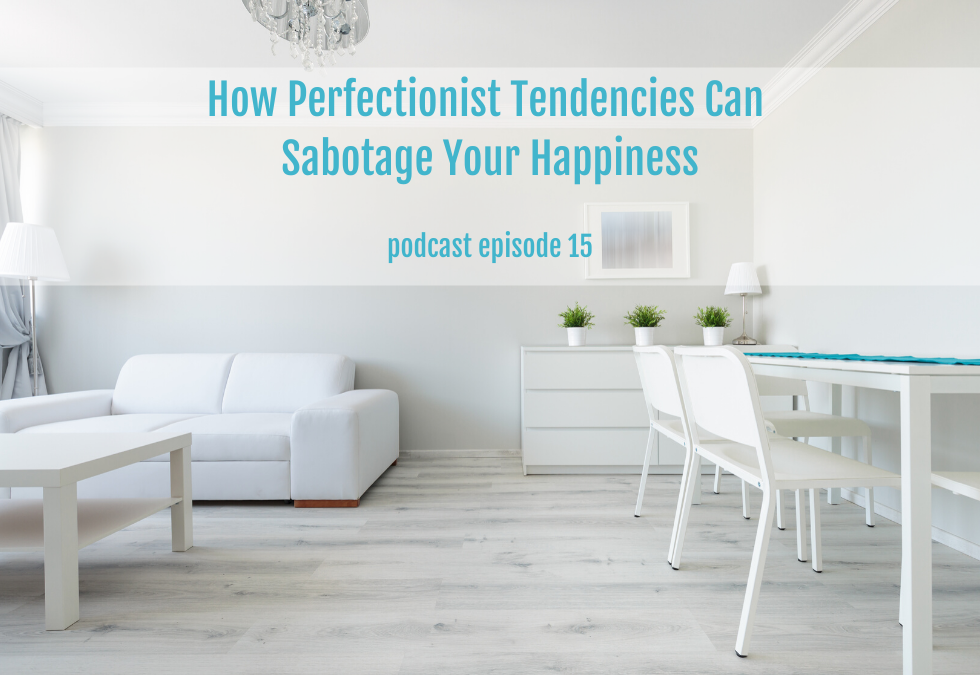 This episode continues to garner a steady flow of email confessions from recovering perfectionists. I have a lot of company out there, maybe you too? Take a listen or scan the transcript below.

Want to subscribe? (I’d love it if you did!)  You can find it on iTunes, Spotify, Google, Stitcher and Soundcloud. You can also check out the podcast home page on BuzzSprout

Recently someone reached out to me on social media and said, “Hey, what do you have against perfectionists?” I suppose I had that coming, because I have made it very clear that I think perfectionist tendencies are unhealthy. More than that, I think they’re actually detrimental and dangerous.

I speak from real experience, both as the perfectionist and as the coach to perfectionists. At one point, I am pretty sure I came very close to being crowned Queen of Perfection. Everything had to be just so. Things had to look perfect, responses to situations needed to be perfect, decisions could only be made if the choice was perfect. I put in every ounce of effort striving for perfection in all things; it was positively exhausting. And worst of all, I never felt like I nailed it.

Which brings me to this next point. Perfectionist personalities, are rarely, if ever, truly satisfied. If they even get to the point where they think they might be about ready to experience some satisfaction with a job well done, what do they do? They raise the bar just out of reach, so they are constantly striving. They’re never able to sit and relax and enjoy a sense of accomplishment over a job well done.

I think that kind of self sabotaging behavior is reason enough move away from a perfectionist tendency. After all, if you can’t enjoy your accomplishments, you’re missing out on a really satisfying aspect of life.

But more than that, perfectionism gets in the way of daily living. Perfectionist housekeepers, for example, are constantly reordering and tidying their space. They often see their spaces as exhibits, something to be appreciated but not actually lived in.

Think about it, if you act more like a museum curator than a hospitable friend, it’s going to work against you when it comes to relationships. Friends will be unable to relax when visiting your home. They might even become uncomfortable in your presence, since they might feel like they’re being judged. If you’re a perfectionist, it’s really hard for people around you to embrace their own average-ness. I mean, who really wants to invite the Martha Stewart of the neighborhood over if you feel like she’s going to be critiquing your space. I know I don’t.

Perfectionist rarely realize that they are sending an unintended message of superiority. That’s right, when you’re acting as a perfectionist, what you’re saying to people around you is ‘Hey, look at me. I strive for perfection all of the time, and I think you should, too’.

Now I know that most of us with a perfectionist tendency, would never intentionally send a message like that. Nevertheless, it’s the message that’s being sent.

Curve balls are a part of life, right? No one likes them, but people generally deal and move on. When a perfectionist get thrown a curve ball, it’s a double whammy. An illness or an unexpected event that gets in their way of keeping everything just so will create enormous stress. The lack of control they experience in that moment can be extremely upsetting (hello anxiety attacks!)

Perfectionism, because it is so often about how things looks, often gets in the way of function. Like in a really BIG way. You’re trying to make everything look pretty and you do it at the expense of function. But if things aren’t functioning well, then what is the point? Perfectly pretty isn’t much good, and I can attest to that.

I learned that the hard way. I had to give up my perfectionist tendencies because I got really sick. I realized that if I was going to manage my illness, what I needed was for things to be truly functional. Striving for perfection wasn’t even an option at that point. But giving it up wasn’t easy, that perfectionist tendency was still there.

What worked for me was channeling my perfectionist tendency into addressing function. I channeled all of my need for things to be perfect into being perfectly functional.

You can think of function in terms of your home. If it’s not standing on a strong foundation and things go sideways, then your house is at risk of falling down. But if you’ve got that strong foundation to start with, then even if the wind whips up and send shingles flying, you’re still OK. You can still go on. You may have to fix the aesthetics, but you still have a solid foundation there. You still have a house to live in.

So that’s why I encourage people to focus on function first and then go back and make it beautiful. Let me know what you think about this idea. Do you think about function at all? Are you perfectionist personality? Have you learned anything about yourself that has allowed you to move away from those perfectionist tendencies and enjoy life a little more? Drop me a line or leave a comment, I’d love to hear from you.