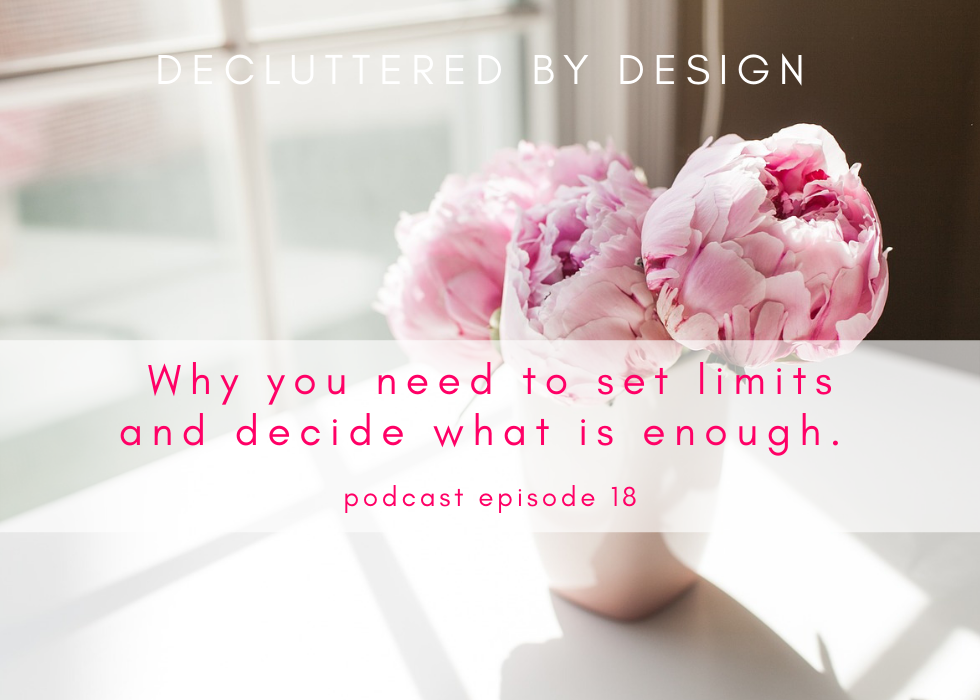 Want to subscribe? You can find it on iTunes, Spotify, Google, Stitcher and Soundcloud. You can also check out the podcast home page on BuzzSprout.

Hello and welcome. It’s Kelly, Jayne McCann, professional organizer and clutter coach. And you are listening to decluttered by design, a podcast where I provide practical guidance to help you declutter your life with ease. So a few weeks ago I was listening to a radio program, it was actually Marketplace on NPR, specifically the This Is Uncomfortable Show. Marletplace focuses on the intersection between our economy and our culture. It provides some really good context for what’s going on out in the world so that we can understand how it applies to and affects our own lives. In the segment I was listening to, they had a guest on who had decided to pay her partner to do the dishes. Yes, she was going to pay him to do a household task, and just to be really clear, this was not a child that she was giving an allowance to. It was her partner. The issue was that he let the dishes pile up until there was a mountain in the sink and she just was not down with that.

You see, they actually had a deal where she did the cooking and he did the cleaning up, but he was not following through in a timely manner on his end of the deal. Hence the idea to pay him as a way to motivate him to wash stuff up sooner. Sounds kind of extreme right? But she was to the end of her rope. It sounded like she was tired of arguing, sick of pleading, done with nagging and she just wanted the dishes cleaned on a daily basis. So why am I sharing this anecdote with you? Because they could have solved this problem if they had done just one thing, they could have eliminated all of that tension, all of that arguing if they had simply set tighter limits on the number of dishes they own to begin with. You see, from what I gleaned, they had multiples of everything.

So there was no sense of urgency to wash things up, which meant stuff could pile up and she could still cook. So he could let all of all of the dishes pile up and she could still, um, go ahead and make a meal, which meant that obviously right, the quantity of dishes and cookware that they owned exceeded what they really needed. So if they had simply set some limits on what they owned, it would have been impossible for this problem to have ever become an issue between them to begin with. Now I know at first blush, setting limits probably sounds like a constraint and it is, it is definitely a constraint. And I know people generally try to free themselves from constraints, but in this case it is a constraint that’s going to empower you. It’s an a constraint that we should all welcome. It’s going to reduce our level of responsibility and our workload.

Like in the example that I was just talking about in that story with the dishes, if they had simply set some limits, he never would have had to face a mountain of dishes again because there, there wouldn’t have been enough dishes to create that mountain to begin with. So what exactly are limits? Well, the idea with limits is to determine just how much of any one type of item you need. It’s about deciding what enough is and why would you want to do this well so that you can begin making really deliberate decisions about what you let into your house. It’s a way to free up space and it’s also a way that we can enjoy a greater sense of abundance. You see, if we feel like we have enough than we can’t be in a state of lack, right? If I feel like I already have enough, I can’t be wishing for more or feeling like maybe I don’t have enough.

Unfortunately, most of us never take time to consider what enough is and if we don’t know what enough is, we will never know when to stop acquiring more. And that’s really important because if we don’t know when to stop acquiring more, we’re going to wind up with clutter. So that’s why setting limits is so essential. This week I want to challenge you to set some limits of your own. I’d like you to choose one category of belongings. It could be a certain genre of books. It could be summer tee-shirts, it can be sets of towels per family member, could be juice glasses. It could be anything. Just choose a category and then choose a limit. Decide what enough is, and then begin to let go of the excess and see how it feels. I’ll close this episode by sharing a Buddhist proverb with you. It is one of my favorite sayings, and it is so simple. It is enough is a feast. Yeah, enough is a feast. That’s why you set limits so that you can feel that sense of abundance, so that you can control the clutter, so that you can free up space, so that you can free yourself from responsibility! I’d love to know what you thought about this episode. You can find me everywhere at @organizingmaven and you can provide whatever kind of feedback you would like.